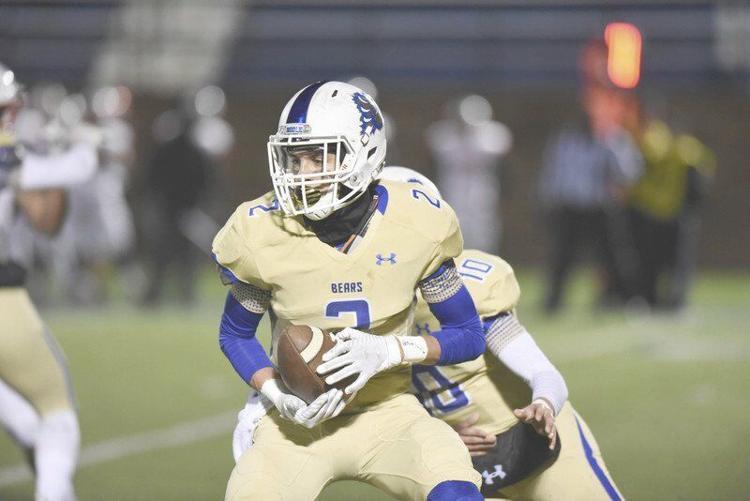 Noble football: Bears look to pick up where they left off from historic 2019 season

Noble's Trevor Lorenz runs with the ball during the Bears' game against Bishop Kelley last season on Nov. 22 at Noble Stadium. The junior will be a key piece to Noble's success in 2020.

Noble’s first undefeated district record ever and first district title since 2003 made for an exhilarating 2019 campaign for the program.

The Bears missed the playoffs the year before, creating plenty of surprise for the historic season. Noble is well back on track to where it wants to be, however, as a program.

“I'm really just trying to put in these kids' heads every day is, hey, we're expected to go to the playoffs,” Noble coach Greg George said. “That's how you prepare. That's how you work.”

George likes his returners and said he feels Noble is one of the four best teams in District 5A-I. Where the Bears rank among those four is more difficult to predict, George said. Noble’s grueling 2020 schedule will eventually provide answers.

Noble opens with Class 4A’s Blanchard, 6A-II’s Midwest City and at 5A’s Piedmont in non-district play. Both Midwest City and Piedmont were playoff teams last year in their respective classes. And Blanchard has plenty of recent postseason experience, despite missing the 2019 Class 4A state playoffs.

Noble’s upgrade in nondistrict opponents is a sign of a thriving program. The Bears historically haven’t sustained consistent football success. They have been closer to that under George, who is entering his seventh season as Noble’s head football coach.

“When I first got here, everybody in the world wanted to play us,” George said. “And then after we've been here a while, it's like almost pulling teeth to find a non-district game.

"That's a good thing, though."

• Key question: How will Noble replace its talent in the trenches?

Noble’s offensive and defensive lines lost ample talent from last year’s squad, including Hunter Largent, who accounted for 121 of the team's tackles.

“We're not as big as we've been in the past, I don't think,” George said. “Especially the defensive line, you're having to go replace three or four [starters].”

It might force the Bears to take a more creative approach with their defensive scheme without as many big bodies in the trenches. The Noble defense boasts plenty of experience at linebacker and safety, which George hopes can mitigate the Bears’ turn to more youth in its defensive line rotation.

• Key returners: Sean Gillespie and Trevor Lorenz. Gillespie had a stellar junior campaign with 136 tackles last year. He is back at middle linebacker and George expects him to be an important leader for the 2020 Bears.

Lorenz, the rising junior had a monster 2019 season as well with 58 tackles, five interceptions and two picks returned for touchdowns. The Noble defensive back also played receiver last year, but his coaches are testing him at quarterback this offseason.

Much like last year’s starting quarterback Austin Fisher, George sees another dynamic playmaker in Lorenz to operate his offense. His athleticism provides the same extra dimension Fisher gave the Bears.

• Key game: Sept. 25 at El Reno. The Bears are headed to El Reno for a second consecutive season because of district realignment. And it comes a week after another road contest — Sept. 18 at Piedmont.

The Bears won’t have it easy with El Reno, considering last year’s contest that ended in a 72-62 win for Noble. It might serve as a solid measuring stick, however, for the 2020 team to begin District 5A-1 competition. It certainly might be a catalyst for another district title run as it did last season.