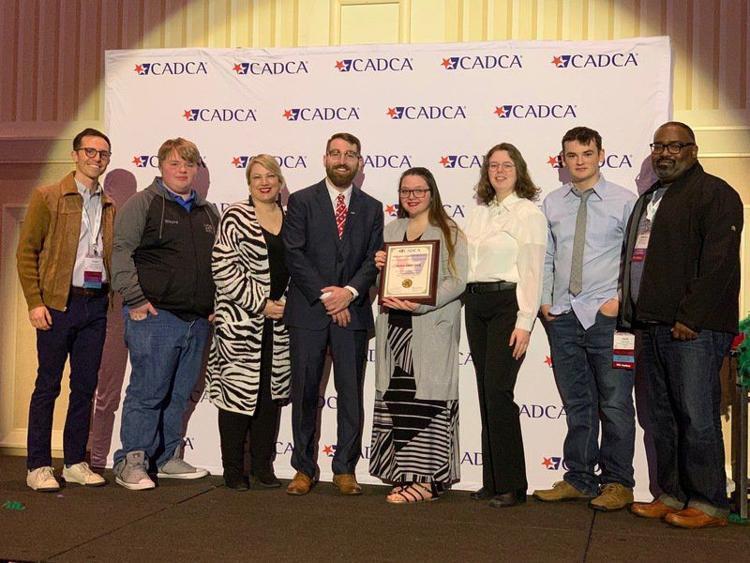 Noble SWAT has been recognized nationally for their underaged drinking compliance check program.

The coalition officially graduated this week from the Community Anti-Drug Coalitions of America (CADCA) Graduate Coalition Academy and received the GOT OUTCOMES! Short-Term Coalition in Focus Award for their Drug-Free Communities program during a national leadership forum in Washington, D.C.

Noble SWAT advisor Kim Adams said the compliance check program has been active for three years. She said she helped submit paperwork for the award prior to the forum, including reports and training and compliance check numbers.

Adams said Noble SWAT, which was started six years ago, has one year left on a five-yearDrug-Free Communities grant. The compliance check program is part of that grant.

Stephens said she admires Adams, who taught them about the adverse effects of tobacco, alcohol and drugs.

“She's amazing. You can talk to her about anything. She knows what she's doing in the line of work that she does,” she said, adding that Adams has inspired her to help her community.

Adams said Noble SWAT is one of the few coalitions that is comprised of only youth members. Noble SWAT has 60 members and 13 adult partners.

Adams said the Graduate Coalition Academy is a year-long process, and the coalition sent Drug-Free Communities coordinator Colton Snead and OU Southwest Prevention Center Director Charlene Shreder as their representatives to D.C. for the academy training. Both of them work with Noble SWAT.

The students — who were selected based on volunteer hours, public speaking and leadership — arrived in Washington Feb. 2 and attended training during the week on such topics as public speaking, JUULing, marijuana, advocating, mental health and opioids, Adams said.

Stephens said she learned that some companies put vaping juice inside products for children, which showed her that tobacco companies really have targeted today's youth.

Gibbons learned that some companies offer nicotine-infused toothpicks, so when people pick their teeth, they are putting nicotine into their systems.

“These companies need to stop using common household items to make their products into, because people wouldn't know. To me, I'd just see regular toothpicks, but they actually have nicotine in them,” she said.

“It just justifies the work,” she said.

Adams said the group meets at every Noble elementary and middle school once a month and at Noble High School twice a month for one hour after school. SWAT is open to students in grades K-12.

Adams said SWAT's ultimate goal is to educate youth on the harmful effects of tobacco, alcohol and drugs.

“It's made a lot of them more aware, especially younger kids,” she said, adding that some students' family members — once educated about the harmful effects about drugs, alcohol and drugs — have quit using the products.

The current policy says city property must be tobacco free at all times every day. The new policy will add language including vaping and similar products, Adams said.

Adams said the leadership forum showed the SWAT members that they are not alone in their fight against tobacco, drugs and alcohol, and it motivates them to continue to fight.

Privett said the leadership forum strengthened SWAT members in their battle against tobacco companies and their desire that the companies stop targeting youth. Instead, they want to show youth that tobacco is harmful to them and others.

Ultimately, SWAT would like to create the first tobacco-free generation, he said.