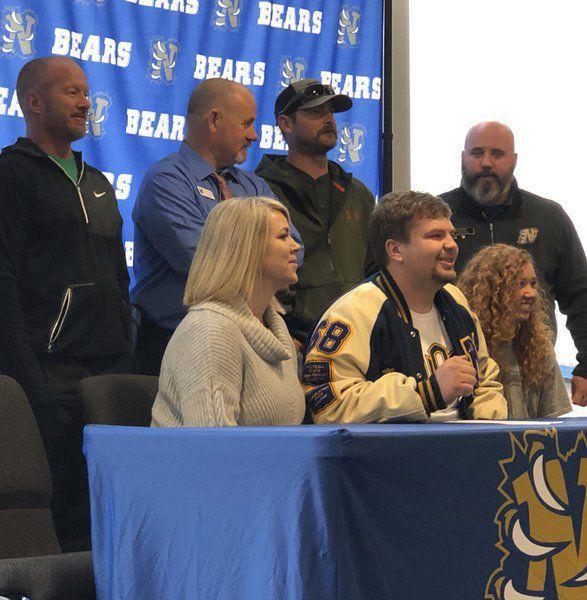 NOBLE — It's not the way it usually works, but Hunter Largent is signed to play his college football at Central Oklahoma and, the way he sees it, it’s a ticket back home.

The entire Bear football team was there for his signing ceremony Wednesday afternoon at Noble's gleaming field house, and among the first questions asked of the player who made more than 100 tackles this past season, even as a defensive lineman, was about his academic plans.

“I’ll probably go into education,” he said, “so I can go and teach history and hopefully come back to Noble and coach high school football.”

It’s all right with Noble football coach Greg George, who gave it a little thought and realized he’s yet to employ a former player as a full-timer on one of his staffs.

“I hope so. If he can get done in four years, that would put me at 52 [years old],” George said, figuring he’d probably still be running the program. “I’ll be here, hopefully.”

One fly in that ointment could be playing football taking Largent beyond UCO.

It’s not like the Edmond university has produced a bunch of pros, but it’s produced a few and Largent was a man among boys in Class 5A this past season.

Asked what it felt like to have his signing moment, joined by teammates and flanked by family and coaches, Largent said “it feels like an accomplishment.”

“It’s my first real dream, to play college football and I feel like I can finally say I’ve crossed that bridge,” he said. “It’s a great feeling that I love.”

Largent was part of a team that reached the Class 5A semifinal round his sophomore season and that won a district championship his senior season.

He was great on the field and everywhere else, too, his leadership creating positive ripples throughout the team.

Until Largent, George had never coached a defender like him. He got to see him on the practice and game fields and when he’d go back and watch video, he got to see the lengths opponents would go to avoid Largent.

There’s the rest of the semester and whatever summer break a Broncho football freshman is allowed. Nonetheless, he’ll soon be gone … until he comes back.

He’s a big fan of his hometown.

“Just the community and atmosphere,” Largent said. “We’re not the size of Norman, but we’re not too terribly small and everything’s based around football … It’s my kind of town.”